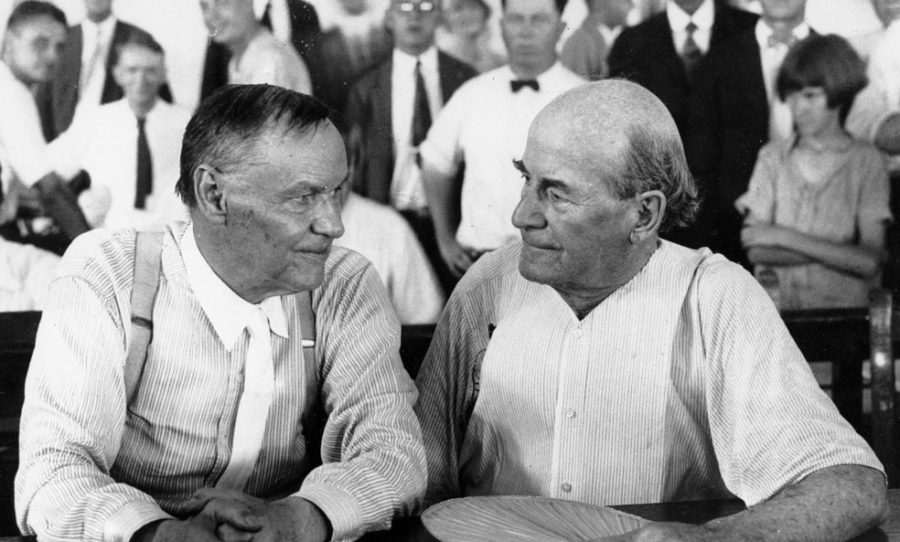 How should history judge a renowned lawyer who — it now appears — was not above bribing jurors, paying hush money to witnesses and employing other devices that, as the author of this remarkable book delicately puts it, “students don’t learn at Ivy League law schools”?

That is the question posed in this eye-opening and icon-shattering account of the bribery trial of Clarence Darrow that took place in Los Angeles in the spring and summer of 1912… if this book is to be believed — and the evidence appears convincing — then Darrow should be anything but a role model, because some of his methods for achieving justice were unethical, immoral and just plain criminal.

From the New York Review of Books

The inevitable bribery charge against Darrow was tried in 1912. It is fair to conclude, looking at all available evidence, that Darrow was guilty. This is the opinion of Geoffrey Cowan, whose masterful history of the case, The People v. Clarence Darrow, published in 1993, states that this was also the widely held opinion of the time.

Darrow may have been guilty as charged of trying to bribe the McNamara jury, but he declined to go down without a fight, and finally, in the face of the distressing evidence, he decided to argue his own case to the jury. Cowan conveys the sense of drama and tension that filled the courtroom as Darrow talked the hours away and captures some of the rhythms that made speeches like this an art form: I am not on trial for having sought to bribe a man named Lockwood. There may be and doubtless are many people who think I did seek to bribe him, but I am not on trial for that. I am on trial because I have been a lover of the poor, a friend of the oppressed, because I have stood by labor for all these years, and have brought down upon my head the wrath of the criminal interests in this country…”

– Russell Baker, “How They Blew Up the L.A. Times“

From The New York Times

Mr. Cowan’s original research into what he calls “the bribery trial of America’s greatest lawyer” adds up to a big story with a larger-than-life central character, a large cast and exciting courtroom scenes.

Mr. Cowan’s book makes a contribution to legal history by detailing the lesser-known trials of the accused newspaper dynamiters and the tactics that Darrow used in his own defense. In “The People v. Clarence Darrow,” the author embellishes the biographical legend of Darrow with colorful anecdotes and knowledgeable insights.

On the night of Oct. 1, 1910, the offices of the Los Angeles Times were blown up, killing 20 people. While defending the labor activists accused of the crime, Clarence Darrow was implicated in jury-tampering.

Although Darrow was acquitted, Geoffrey Cowan, weighing the evidence in “The People v. Clarence Darrow,” concludes that he was probably guilty. The picture of Darrow here is at odds with his popular image as a high-minded idealist, showing him instead as a man profoundly cynical about the legal system, which he saw as a tool of oppression. In his fight against it, Darrow nearly forgot the first rule of a criminal-defense attorney: If someone has to go to jail, make sure it’s not you.

From The Chicago Tribune:

This book is a bitter pill for anyone who ever dreamed of going to law school to become another Clarence Darrow-and, save for William F. Buckley and Rush Limbaugh, who of us over 40 didn’t? As with most medicine, however, we’ll be better off for it. Heroes are even more compelling with a bit of clay on their feet, and in “The People vs. Clarence Darrow,” Geoffrey Cowan demonstrates that the great crusading lawyer didn’t always play by the rules.

Cowan argues persuasively that Darrow tried to fix the McNamara jury, showing that the bribe money had to have passed through Darrow’s hands. Darrow’s trial (memo to Hollywood) was the stuff of which movie scripts are made.

From the Organization of American Historians

After a long and difficult trial, marvelously described by Cowan, the jury found Darrow innocent. Cowan is an attorney, and he puts his professional knowledge to good use in explaining both the legal technicalities and the strategies employed by both sides.

After reviewing Darrow’s life before the fateful decision to come to California, Cowan devotes nearly four hundred pages to a practi- cally day-by-day narration of the two cases. He does a superb job of weaving together the complicated strands of his tale: the national setting of industrial conflict and violence, the political situation in California, the personal lives and motives of actors in the unfolding drama. The effort required literary skill of a high order, and, to his credit, Cowan generally balances the parts well, providing appropriate contexts and backgrounds, while moving the story forward with increasing excitement to the gripping climax, the courtroom drama in the trial for bribery.

From The Los Angeles Times:

Clarence Darrow, now remembered mostly as the hero of the Scopes “Monkey” trial, dramatized in “Inherit the Wind,” was famous in his own day as labor’s lawyer. In 1911, after defending the McNamara brothers, union men who had bombed the Los Angeles Times building, he himself was tried for attempting to bribe a juror.

Professor Geoffrey Cowan, who says Darrow was a hero of his youth, has found much new material, if not much actual evidence, and has made up his mind that Darrow was guilty. To understand how Darrow could have done such a thing, he has tried to understand–and to make us understand–the context in which it was done. This makes the book more interesting and valuable than it might have been.