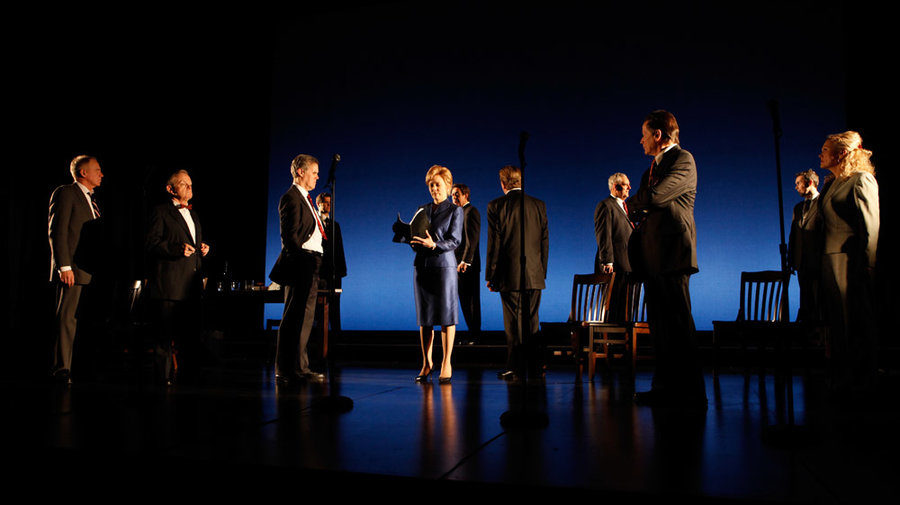 From The Washington Post after the 1991 production by L.A. Theatre Works

“Top Secret” — vividly written and full of the paranoia and media-vs.-government bile of the Nixon years — includes portrayals of several real people I knew well. It was impossible, with my eyes open, to make the rounded, sweat-shirt-clad figure of Asner fit my image of Washington Post Executive Editor Benjamin C. Bradlee, or reconcile the bald, intense visage of veteran Post Pentagon correspondent George Wilson with the actor playing him, the tall, wisecracking, dazzlingly blond Begley.

…The clash of foul humor, frantic competitiveness, financial uncertainty and moral courage came back in the play with full intensity, and spared few of the principals their best and worst moments. Aarons interviewed all the people involved, and he and Cowan distilled several interesting personalities into a few characteristic sentences.

Needless to say, given recent controversies involving government secrecy, national security issues, and the press, “Top Secret” has the thematic immediacy of a text-message newsflash. Fortunately, it also offers the entertainment value of a really juicy tabloid. As the production continues to tour the country, who knows, maybe it will encourage audiences to go out and buy a couple of newspapers.

The decision as to whether to proceed fell to Katharine Graham (the pitch-perfect Kathryn Meisle), the paper’s publisher, who hadn’t yet found the confidence to defy her advisers and make a decision based on her own gut. As much as this spare and stylish play by Geoffrey Cowan and Leroy Aarons is about the events surrounding the publication of the Pentagon Papers, it’s also about great journalists and their excitement over their work. That excitement is contagious, and almost every actor’s performance, under the direction of John Rubinstein, is humming with truth and the thrill of much needed revolution.

During its 10-day run “Top Secret” has played to sold-out audiences in Shanghai and Guangzhou, with many performances punctuated by shouts of approval from the audience and standing ovations.

Perhaps most gratifying for the producers was that those audiences were almost entirely Chinese and young, many of whom learned about the production through weibo, the Twitter-like microblog service that has revolutionized the way Chinese communicate with one another — including expressions of displeasure over government malfeasance.

From The New Yorker

Watching a young Ben Bradlee stalk around an unheated theatre in Beijing, huddling with a heroic Katharine Graham and ordering his military correspondent George Wilson once more into the documents, made it hard to sleep that night. It was thrilling.

– Evan Osnos, “The Pentagon Papers, the Press, and Beijing“

A Chinese government official who attended the play said he was impressed by the “toughness of Americans.”

“It shows the difference between a developed and a still-developing country. It is not just a matter of superhighways,” said the man, who gave his surname as Liu. “This play gives us food for thought.”

Although Cowan and Aarons based the script on research and interviews, poetic license inevitably has been invoked. Cowan says he’s made reporter George Wilson “the hero of the piece,” for instance, even though he says Wilson wasn’t actually at Bradlee’s house. The court proceedings are condensed into a single event, with a prosecution lawyer and a judge both given fictitious names.

A bit of invention, Cowan says, goes with the theatrical territory. But the journalism professor is happy to compare “Top Secret” with the kind of history-based dramas he admires. He says, “My play is much more accurate than ‘Copenhagen’ or ‘Frost/Nixon.’ ”

And why revive “Top Secret” now? Cowan and Loewenberg believe the Pentagon Papers incident highlights the line between the public’s right to know and the government’s need — not always illegitimate, Cowan notes — to keep certain things secret.

From The Shanghai Scrap

In any case, if you’re in Beijing tonight, or tomorrow night, you really ought to go see the play. It’s a ripping good story, and a rollicking good time, and if you like a little American history mixed into your evening, well, there you go.

– “Docudrama Top Secret: The Battle for the Pentagon Papers“

From British Theatre Guide after the play was selected as one of five docudramas included in  L.A. Theatre Works Audio Docudrama Series

The play that completes the engrossing set is just as enthralling and informative as its predecessors….This is cracking stuff and should be compulsory reading for anyone interested in politics and the relationship between the government and the media in America and more widely.